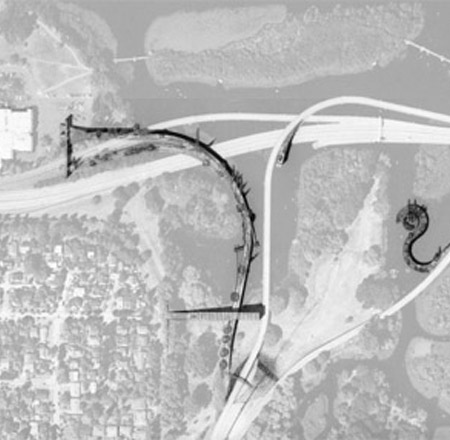 A Park to Somewhere

Some meandering considerations on the 4th nature of landscape

At least that is what Theodora’s inhabitants believed, far from imagining that a forgotten fauna was stirring from its lethargy.

Relegated from long eras to remote hiding places, ever since it had been deposed by the system of nonextinct species, the other fauna was coming back to the light from the library basements where the incunabula were kept; it was leaping from the capitals and drainpipes, perching at the sleepers’ bedside. Sphinxes, griffons, chimeras, dragons, hircocervi, harpies, hydras, unicorns, basilisks were resuming possession of their city.

I’d like to address a category of architecture: ruins. Not the ‘aristocratic’ monumental ruins representing the pride of nations, objects of touristic pilgrimage, but humbler ruins that are the debris, abandoned architectural by-products of our culture, often removed from our collective memory. They do not bear the ‘obviousness’, as defined by Josef Frank, of the classical monuments, but have the accidental character of ‘objets trouves’. They belong to a world apart, anachronistic and captivating. Size does not matter: an old steel buoy rusting on the shore, a ship docked forever on a spit, stone chimneys alone in the woods, an imposing concrete cooling tower of an unfinished nuclear plant on the bank of a river. Instead of asking who built them, why and what can they become, we consider them distractedly, denying them the power to change the contextual rapport. They may be errors, victims of economic recession or war, or simply have lost pace with their surroundings. This debris often represents inseparable faces of the same coin: economic achievements on one side, ruins on the other. They are fragments adrift in our landscape, the ‘4th nature,’ as defined by Charles Jencks, waiting to be reclaimed or left to definitively return to ‘zero nature (the earth),’ also defined by Jencks. How should the problem of their presence be approached? Confronting the past is difficult, its removal often simpler, but sometimes erasing the ‘error’ is more cowardly than the error itself. These ruins need to be considered with attention if not reverence. As our culture evolves they continue telling a story if we will listen. They have the unexpected ability to reconnect themselves with the actual world. ‘Cathedrals in the Desert’ was the name given many huge projects of the mid 20th century Italian economic boom. Products of the Kafkaesque inefficiency of that political /bureaucratic world, they were developed but never completed. Nevertheless they sometimes contained their own redemption.

For instance the Barene of S.Giuliano in the Venice Lagoon was the object of a grandiose plan for the development of an oil refinery, begun in the 1960’s but eventually abandoned unfinished, leaving deep, exposed concrete foundations. After some time the area spontaneously re-naturalized and the geometric pattern of the concrete ‘tubs’ became a fascinating wetland of extraordinary natural value. The burden of removing the ‘error’ often preserves it until the time is right for its redemption.[/vc_column_text]

The unused SR520 off-ramps northwest of Seattle’s Arboretum are significant in this regard. In a city that loves demolition, having systematically removed churches, theatres, even its ‘mythical’ 7th hill, thereby creating the Denny Regrade, it is remarkable that these ramps are still standing. They were built in the 60’s, fortunately never connected and never resolved. Today they incongruously unwind in the arboretum and Portage Bay, a reminder that action before thought is a deadly sin.

As our culture evolves they continue telling a story if we will listen.

Many times, sitting in traffic on SR520, I have considered this debris with curiosity, wondering what can be done with them. They are waiting for a resolution that gives them dignity and brings them into the fold of the city. The Arboretum Master Plan suggests reusing them as a ‘multi-use link’ (including bicycles and service vehicles) to the present Museum of History and Industry (MOHI). I believe, instead, they should become a protagonist in the overall design of the city rather than a diminutive version of the original intent. I propose they be transformed into a linear park where one loses oneself in the linear labyrinth of Borges, a potential green connection between MOHI and the Arboretum, along paths and hills, conservatories and creeks. The whimsical effect of a park passing over the highway with dynamic vistas, overlaying vegetation on concrete super-imposed on the original riparian groves of phragmites and salix, offering alternative approaches to the water with ramps and small docks, would be enchantingly subversive. The linear character of such a park reinterprets, in an inside-out way, the original intention of the ramps. Symbolically, its linear quality forces the user along an axis that cannot be abandoned, follow to the end or return in your tracks. Similar to the use of the car ramps, it is parallel with the original postulate.

The idea that the park becomes a ‘4th nature’ in the redevelopment of this infrastructure is enthralling. Peter Latz writes ‘it is time to integrate ecology and design in order to develop new types of nature’. This opportunity does not sanctify the by-product but returns it to the pulse of the city becoming a forum for the larger debate about the city and its approach toward the reuse of its ruins.[