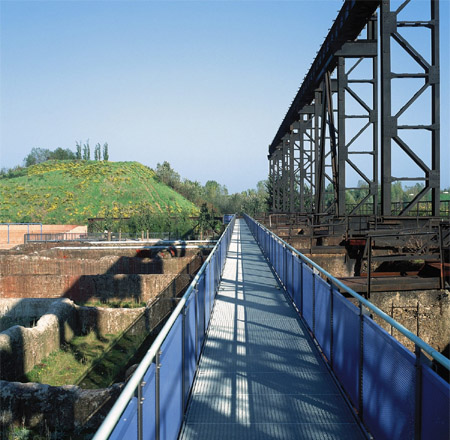 In 2004, Lucia Pirzio-Biroli interviewed Peter Latz, landscape architect and professor of landscape architecture at the Technical University of Munich.  The topic was the Landschaftspark Duisburg Nord, a reclaimed coal and steel production site.

1. What was the site like when you found it?
The future landscape park was a huge 230 hectare conglomerate: of sites shut down for years like the cokery and the mine; of sites recently shut down like the blast furnace plant; and of parts still in production like the foundries.

All stages of succession and functions of this large “collective combine” were identifiable, particularly the railway connections. They were almost the only links to other parts of the plant. At the start of our project they were still in good shape and very visible. Today you can reach the heart of the park with railroad cars.

We experienced the “brownfield” and the plant just left and cooling down with the liquid iron of the foundries.

2. How did your ideas come about?
In the early eighties we worked on the “Hafeninsel” or “River Port Island Park” in the Saar region, at first only theoretically. Realization began in 1985 and it was inaugurated in 1989. There I learned how the genius loci can both be fixed to ruins of the past and linked to new elements and new uses.

As a child, in the evening, the light of the Bessemer converter of a nearby steel mill coloured the ceiling of our bedroom deeply red.

I also saw clearly, that the total demolition in the southern Ruhr beginning in the sixties and called “modernization” destroyed the relationships and history of many people

Another essential influence was the mid-European archetypal myths. Could they be transposed on to the special place? Can individual memories and stories that are not associated with the place but with culture gain recognition in this system? How will a blast furnace turn into a dragon?

3. What was the nature of the competition you won for Duisburg?
It was an international invitational competition based on the invitee’s experience and past work. It was also cooperative. The individual teams worked at the site in the same large room.
The competition lasted one year; we were obliged to give interim reports every three months explaining the reasons for our results and discussing them with numerous citizens� committees and interest groups.

There was no program. The program was the object of the competition to be developed by the competitors.
The project itself was independent but was a part of the International Building Exhibition (IBA) Emscher Park.
There was only one architect on our team. Throughout the development of the project, however, numerous engineering firms, pollution specialists, industrial archaeologists etc. were consulted for the respective parts being prepared for realization. Consequently the teams were very flexible.

The jury participated throughout the process: The town of Duisburg, the IBA Emscher Park, the citizens’ groups, some specialists of our profession as well as the politicians of the town.

4. When was the competition won and work begun?
We won the competition in 1991. Work began immediately. The first stages could be identified as the “Securing of Spaces”. The different parts of the park were single, very restricted projects that had to be coordinated individually with the politicians and promoters.

When was realization complete?
It will always be necessary to complete something. You could, however, define the end of construction in the year 2002.

I would like to stress one very important phase within this realization: The difficulty of dealing with the non-gramineous neophytic vegetation imported from all over the world during the active processing of iron ore and by now an important part of the ecology of the site but outside the gardener’s repertoire. We had the time to test, develop and train gardeners for the specific task.
They have taken on the vegetation management completely and become skilled enough to preserve these special fields of vegetation (in this case three types).

5. Why do you think your ideas were accepted?
We were convinced it should be possible for all groups of users to develop their own specific interpretation of the space. Our interventions were cautious and sometimes hard to recognize. The possibility of climbing the blast furnace, an important part of the park, found its expression in detail. A principle of the design is that nothing should work against the existing pattern, no bridges or paths lying at an angle to the original structures. Our idea was to accept or find it interesting to walk like the locomotive runs, the users should adjust to the movement of the locomotive, not merely walk in its path. In this way we preserved a great deal of it while at the same time changed the use completely.

What was the cultural climate of the time?
The Ruhr district had become an economic disaster. Renewing this formerly very important industrial area of Europe was a local tour de force. The old rules tried earlier in the southern Ruhr had proven unsuccessful. The need for new symbols and new ideas was one of the reasons for the IBA Emscher Park.

Was there public debate that surrounded them and what impact did that have on the project?
There were strong political debates during the planning of the project and its realization. Even the union of landscape architects campaigned against the project saying our ideas offended the eternal rules of the profession.

The resulting project was more precise, especially with respect to the users’ ability to interpret it. Through open dialogue they gained insights into other levels of planning.

The main principle of this park was that it be strictly realized in its structure and be eternally open in its details. Discussion with conservationists, hydraulic engineers, the water resources office etc. strongly influenced the different planning stages.

It is difficult to compare the spatial sectors – the water system with the bunker gardens for instance – because they had very different degrees of freedom.

Economy was an important principle employed by the IBA Emscher Park. Every time a planner proposed a more economic solution he realized it. When the cost was higher he was obliged to find another solution.

Today a management company operates these buildings, earning money leasing them and securing their maintenance. The maintenance of the park in general is still public responsibility.

7. How do you think the project has impacted thinking about the public park?
I don’t think breaking or changing paradigms impacts societal understanding or that users and municipal administrators see the identities of parks differently, just as our profession doesn’t.

Every visitor to the park – and there are many thousands – is surprised by the number of people using it even in winter.
Residents of the surrounding quarters and region are using it so naturally as if no other parks ever existed, without realizing this completely different approach.

I am especially happy that the youth have conquered it and use it until late at night. Young people even on ice-cold New Years’ Eve are up on the blast furnace’s charging platform.

The worldwide recognition of this park has given me more confidence in my “structuralist” approach, understanding existing structures as information systems. It has reinforced my theory that landscape is composed of a wealth of selectable information layers covering one another up and presenting themselves as coincidental images only to the beholder. It is most important to maintain these information layers and complete them – the opposite of mono-structured information.

I expressed this in my teaching long before these parks were realized. At Saarbrucken I submitted, for the first time, the different information layers of a park as a plan refusing to draw an overall design or master plan.

“Palimpsest” correctly describes this park, more precisely an endless Palimpsest. I am convinced that the public will bring further information layers to it – even if they are only idealistic.
Contrary to other projects, artists are not in the foreground here because the whole work has become an open artwork exactly on the basis of Palimpsest.

The real knowledge about the production characterizing this space for 150 years defines the genius of the place, not its ruinous character. This also applies to numerous technical details of the technical and social processes, the connection between the plant and its social surroundings.

Landscape is the cultural result of the work of generations. To preserve these cultural layers and feature them, the “new design” should exercise restraint. (Image: Cower Place 03)

A principle objective here is not only transformation as an abstract system, but the addition of information layers (not functional layers). Instead of ore, the storage bins of the bunker plant now shelter water or seal polluted material or, beautifully, gardens. Without relinquishing their image of heavy brutal concrete walls, continuing to be containers, they are filled with the most important repertoire of our ideas, the reiteration of paradise and so forth…

In an ecologically or more sustainably oriented world, nature and technology have to present themselves homogeneously or even identically. For a new clean water system, we used the profile of the old waste water channel, to avoid contact with the polluted ground all around. This artefact restores natural processes in an environment of devastation. The processes follow the rules of ecology, but are initiated and maintained by means of technology. Man uses this artefact as a symbol for nature, but remains in charge of the process. The system is both entirely natural and entirely artificial.